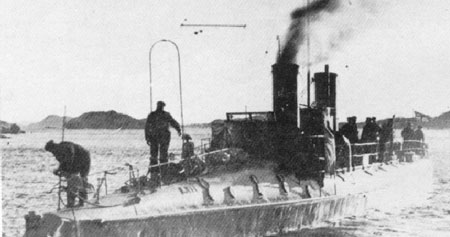 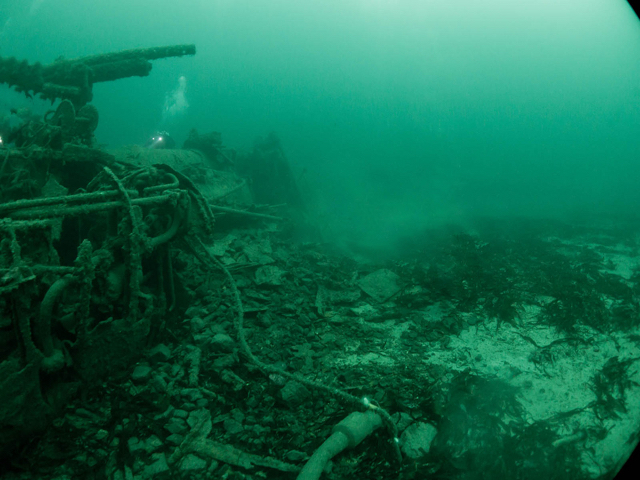 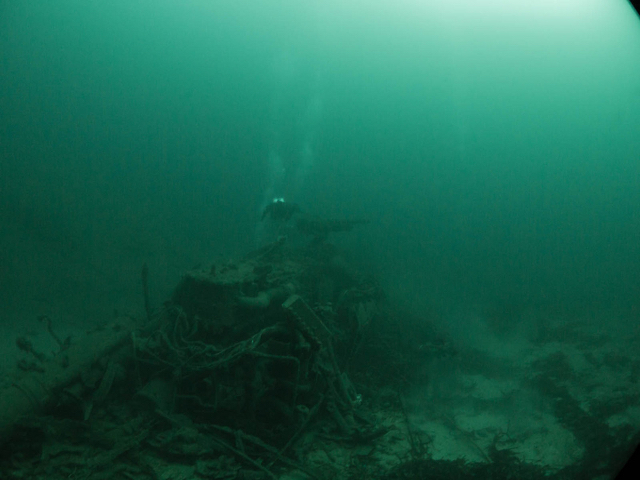 Although the KNM “Kjell” at the time of its sinking no longer sailed under the flag of Norway and the German Navy took as “Dragoon”, her wreck is known because of the great importance for Norwegian history until today under its original name. The “Kjell” was originally a Norwegian torpedo boat Class II of the Royal Norwegian Navy (KNM). It emerged after a marine design from 1905 and was built from 1911 to 1913 under the hull number 106 on the Marinens Hovedverft in Horten. The launch took place on 12 March 1912 as KNM “Kjell”. KNM “Kjell” was equipped with a three-cylinder triple expansion engine indicated 1800 hp. The design speed is specified with 25 kn. She was initially equipped with two torpedo tubes 45,7 cm as main armament. One was permanently installed facing forward in the bow, the second on a rotating carriage on deck. As secondary armament she carried two guns Dreipfünder caliber 4.7cm. The crew amounted to 18 man. During the course she got a new steam engine with only 1000 hp.

KNM “Kjell” was known even before the start of the operation Weserübung and the associated outbreak of war in Norway through their involvement in the infamous “Altmark” -Incident in Jøssingfjord in Stavanger. The “Altmark” was a 1937 on behalf of the German Navy off the stack overflowed faster tanker, which had served as a replenishment oiler from 1 September 1939 the armored ship “Admiral Graf Spee” until its scuttling on 17 December 1939, Montevideo. During this period the “Admiral Graf Spee” had led a privateering against Allied merchant shipping in the South Atlantic. Captured sailors of the hijacked or sunk vessels were placed on the “Altmark”. As the “Altmark” their return to Germany took, 299 prisoners were brought under-in improvised accommodation, many of whom were British. On 16 February 1940 she was eventually tracked down by a British destroyer HMS Association under the leadership of “Cossack”. The “Altmark” retreated into the Jøssingfjord. The KNM “Kjell” under the command of the then 29-year old Lieutenant Finn Halvorsen played here together with her sister ship KNM “Skarv” a decisive role in the effort to safeguard the Norwegian neutrality. Halvorsen has repeatedly protested against the entry of British naval units in Norwegian waters and the consequent violation of its sovereignty. But on the same day was the “Altmark” stormed by a prize crew and the 299 prisoners freed. This UK celebrated as a coup de commando action nevertheless constituted an act of war within the territory of a neutral state, which was undesirable from the Norwegian side. Nazi Germany threw Norway before then to be unable to maintain its neutrality. The “Altmark” -Incident was then exploited for propaganda purposes by the German side to accelerate the own invasion plans to get a feared occupation of Norway by Britain before. This led to the occupation of Norway by Germany under Operation Weser exercise that began on 9 April 1940th
As with the company Weserübung began the occupation of neutral Norway through Germany on 9 April 1940, the KNM “Kjell” the 2nd Torpedo Boat Division was subordinated. To entering the battle group IV of the German Navy, led by the cruiser “Karlsruhe” in Kristiansand could oppose nothing that day, because it was still early in the morning for repair work in the Hoivold shipyard. Their commander was Lt. F. G. Finson. KNM “Kjell” fell on the same day in German hands, without having to intervene in the action. On April 19, 1940, she was asked by the German Navy as a torpedo boat “Tiger” in service. Already on 23 April it changed the name but in “KT 1” (Coast Torpedo Boat). It received the tactical identification NK 01 (Norway, Kristiansand) of Hafenschutzflottille Kristiansand-South. On 1 October 1940 she was renamed “Dragoon” and received the new identifier 02. The identifier NK NK 01 was taken over by the “Grenadier”. The two torpedo launchers on the deck were removed at an unknown date. The rigid Bugtorpedorohr remained however. The two old Dreipfünder gave way to a rapid-fire cannon 7.6 cm on the stern and a revolver gun 3,7 cm. Added to this was a machine gun.

On September 28, 1944, “Dragoons” was between 17:20 and 17:29 clock clock at Ryvingen near Kristiansand six Mosquitos of No. 248 Sqn. the RAF Coastal Command attacked. She was there on a patrol in the waters off Mandal, west of Kristiansand. She had commissioned to make a sea mine harmless. When the attackers it was four Havilland Mosquito FB Mk VI De and two Mk XVIII Tsetse, a special version, armed each with a 57-mm cannon-Molins. They were on an anti-submarine use between Lista and Kristiansand. The six machines were part of the Banff Strike Wing and were greeted by Flt. Lt. L. Bacon led. The two tsetse were the HX904 / E of Flying Officers WN Cosman (RCAF) and LM Freedman and MM425 / L of Flying Officer WG Woodcock and Vacher. “Dragoons” was taken with the two Molins cannons and 20 mm cannons and MG under attack. Also 500 lb bombs and depth charges were dropped, the latter from a FB Mk VI with the trunk code K. One of the depth charges hit “Dragoon” amidships under the fuselage on the starboard side. She has received several more hits, they finally brought to sink. Seven crew members died in the attack were killed. Seven others were injured. Overall survived 18 of the 25 crew members.
The wreck of the “Kjell” was discovered only of 2006. The bug lies in 35 m depth, the tail up in 40 m. One finds still relatively intact fuselage parts. Particularly spectacular is the 7.6 cm rapid-fire cannon which still stands on the stern and their running seems to be directed at the sky. A powerful steam boiler with its pipes, which is exposed in a broken fuselage section amidships, is an impressive sight. Due to the relatively good condition of the wreck and he historic importance that had the “Kjell” for the Norwegian Navy, this wreck is a rewarding and exciting destination.